Does Rhinoplasty Improve Your Breathing Function?

Rhinoplasty, more commonly known as a nose job, is one of the most popular facial plastic surgery procedures. This surgical procedure is performed on the internal or external structures of the nose by experienced plastic surgeons.

There are two main reasons patients have to undergo rhinoplasty: (1) for cosmetic reasons (i.e., changing the aesthetic appearance of the nose) and (2) for functional reasons (i.e., to improve nasal breathing).

With cosmetic rhinoplasty, the surgeon can change the external characteristics of the patient’s nose. This includes issues related to genetics as well as the result of an injury.

However, this procedure can also have a more functional purpose. Specifically, this type of plastic surgery can also change the internal function of the nose to correct breathing problems. When rhinoplasty is used to help the patient breathe more easily, it is referred to as functional rhinoplasty.

Septoplasty is performed by plastic surgeon to correct a deviated septum. A deviated septum occurs when the nasal septum is crooked. This leads to a narrowing of the nostril on one side thereby obstructing airflow. Having a deviated septum makes it difficult to take in enough air, which makes it hard to breathe.

Septoplasty is a surgical procedure in which the cartilage of the nasal septum is straightened to improve an uneven nasal passage. This ultimately allows for easier breathing through the nasal airway. Specifically, the plastic surgeon will move, reshape, or remove the cartilage and tissue of the deviated nasal septum to allow the patient to successfully take in larger quantities of air.

Cosmetic rhinoplastyrefers to a type of reconstructive plastic surgery used to make changes to the external features of the nose. Patients who choose to have open and closed rhinoplasty for cosmetic purposes typically do so because they are unhappy with the appearance of their nose.

Rhinoplasty carried out for cosmetic purposes can accomplish the following goals to improve the patient’s overall facial appearance:

Contact us by phone, or message us on our website, to find out if cosmetic rhinoplasty is right for you.

BOARD CERTIFIED SURGEON IN MIAMI

Dr. Kallman is Board Certified by the American Board of Plastic Surgery. He re-certified his Plastic Surgery Board Certification in April 2005 and 2015- one of the first doctors in South Florida with this recertification.
An active member of the American Society of Plastic Surgeons, American Society of Aesthetic Plastic Surgery, and The Greater Miami Society of Plastic and Reconstructive Surgeons, he’s in an elite class.
Because of this wealth of knowledge and passion for cosmetic surgery, he has lectured extensively around the world- particularly on the intricacies of primary, secondary rhinoplasty and revision rhinoplasty.
An avid researcher, he continues to study innovations in lip augmentation, brow lifts, state of the art blepharoplasty, fat transfer surgery, breast surgery, nasal reconstruction, and anti-aging therapeutics.

Functional rhinoplasty can be used to correct breathing problems resulting from an airway obstruction in one nasal passage or both resulting in reduced nasal airflow. Such obstructions affecting breathing can be caused by issues such as narrow nostrils or enlarged turbinates.

Nasal turbinates, or nasal conchae, are made of bone, blood vessels, and tissue. When turbinates become enlarged, they can obstruct the nasal airway. Causes of enlarged turbinates include allergies, sinus infections, or hormones. Functional rhinoplasty can therefore be used to widen narrow nasal passages, remove tissue blocking the nasal passages, and reduce the size of nasal turbinates.

One of the most common causes of nasal obstruction surgeons deal with is nasal valve collapse, also known as nasal valve stenosis. When the narrow portion of the patient’s airway becomes to weak, it can collapse. This can occur on one or both sides of the nose. The affected individual may be unable to take in sufficient amounts of air.

Obstructions of the nasal airway can affect nasal breathing, resulting in sleep difficulties like sleep apnea. Functional rhinoplasty can therefore improve a multitude of issues affecting a person’s life.

Overall, functional rhinoplasty can be carried out by plastic surgeons to address nasal swelling and breathing-related symptoms related to issues of the nasal airway resulting in decreased airflow. This includes breathing symptoms caused by:

Contact us by phone, or message us on our website, to find out if functional rhinoplasty is right for you.

What can you expect from Miami's Best Rhinoplasty Surgeon?

Miami’s Best Rhinoplasty Plastic Surgeon, Dr. Kallman has always been ahead of trends in digital imaging for cosmetic surgery consultation. Now more than ever, in the wake of Covid-19, his advanced digital skills mean your virtual experience is just as informative, interactive and accurate as meeting in person!

If you choose to have your initial rhinoplasty consultation online, we’ll walk you through the process step by step. That includes providing a video of photo instructions. Additionally, we’ll use Mirror digital morphing simulation to show you a variety of personalized rhinoplasty options.

Once you’re scheduled for plastic surgery, we’ll arrange for you to visit with us safely and privately. At that time, you’ll receive professional photos, detailed procedure information and other preparatory paperwork. We require certain medical conditions, including bloodwork, to be completed before plastic surgery as well.

Is Rhinoplasty Right for Me?

If you are concerned about the form of your nose or you are looking to improve your nasal function so you can breathe better, rhinoplasty may be a good treatment option for you. Contact us by phone or using this website to book a consultation with our board certified plastic surgeon, Dr. Brandon Kallman, today! Results and treatment recovery may vary from patient to patient. Phone us for more information. 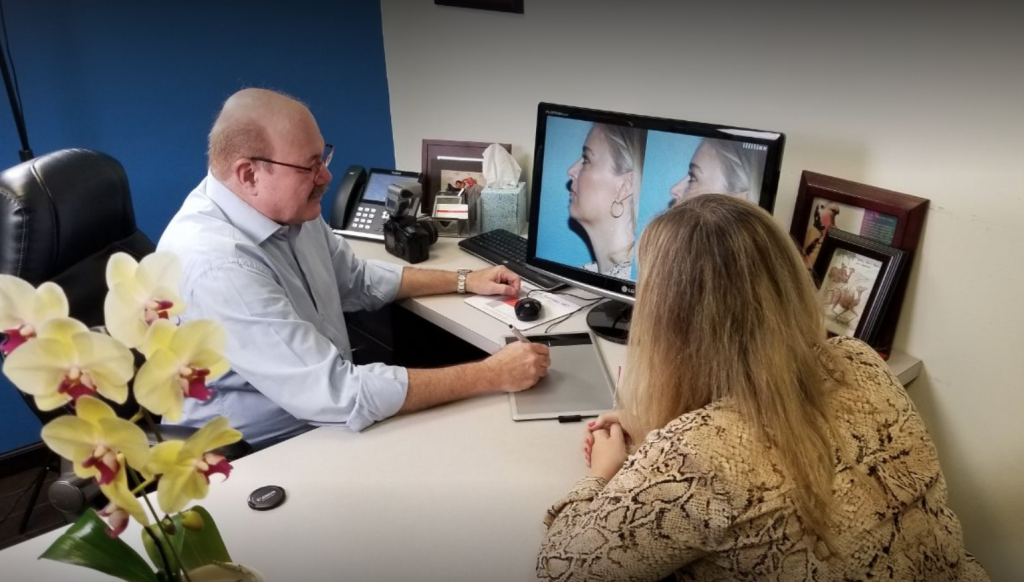 Face Miami’s Dr. Brandon Kallman, MD. is Miami’s best rhinoplasty surgeon and revision rhinoplasty surgeon. He brings over 27 years of experience as an Aesthetic, Cosmetic, and Board-Certified Plastic Surgeon to his prestigious practice. Miami men and women trust his extensive expertise in a diverse range of facial cosmetic procedures, and he’s renowned as a rhinoplasty specialist.

When choosing a board certified surgeon, it is important to select a doctor with skill and experience. Dr. Brandon Kallman is rated 5 stars on ratemd, healthgrade, vitals, and real self, can help you create a result that fits in with your other features and looks natural. He can also help you understand the benefits and limitations of your chosen procedure, so that you can make the decision that is right for you.